And come back when I am at home or in office.


As a kid, monsoon was soo much fun. You had a legitimate excuse to bunk school/college if it was raining too heavily. I remember going up to our terrace and getting completely soaked. Even cycling from school to our home was fun (albeit a bit tiring). And even though I had my raincoat, I almost never wore it. One reason for this maybe because the full length raincoats make you look so dorky. The closest I have come to wearing an evening gown was the raincoat. Waddling in the muddy water is certainly not my idea of ramp-walk. Can there be anyone who has not made paper boats and floated them in the puddles. Childhood is such a great excuse to do all the things that adults consider stupid and immaturish. Even floods didn't dampen anyone's spirits; except for the poor ones who were affected by it.For the rest of us, it meant staying at home, enjoying with friends and family. And venturing out towards the river to see it in full spate.


Now I prefer to watch rains from our balcony. There's something about rains that brings on a feeling of nostalgia. It's an excellent atmosphere for day-dreaming. You know how they say that one should always save for a rainy day. I know it is in context with money, but I am saving my leaves.So that I can safely skip office if I am feeling too lazy to venture out. One thing that I am missing sorely this time is the smell of wet earth. Instead whenever I come out of my home, my nostrils are greeted with a slight stench. And some pesky kids waiting in line to splash the dirty,muddy water on the next hapless rider who comes their way. I dread putting my foot down in the puddle so much that I feel like I am in a "Slow Bike" contest. I don't feel like writing about long drives in the rain, corn on the cob etc etc. Once the monsoon season starts, you can find these articles in all the newspapers anyway.


It is said that in future most wars will be fought over water. I can already see a sort of mini-war raging on between humans and nature. The tsunami in 2004, China's quake lake make Mother Nature seem so scary. Some Indian states are engaged in disputes over water; Cauvery issue being one of them. A fight is on between the general public against the administration. We all like blaming the administration when things go wrong, but no one gives it a second thought before building illegal constructions which block the flow of water or dumping garbage till the drains choke up. But hey, that's not our problem is it? By the time things take a turn for the worse, we will be too old or probably dead. So why bother? Let the future generations worry about saving the earth.
Posted at 8:36 PM No comments: Links to this post

Email ThisBlogThis!Share to TwitterShare to FacebookShare to Pinterest
Labels: Babble

The Joys Of Pessimism 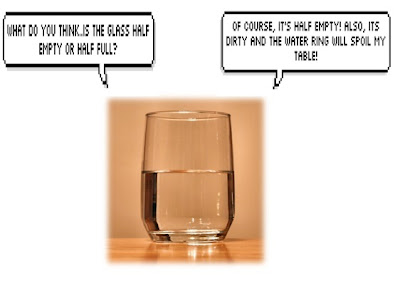 Joy and Pessimism?? Aren't these two supposed to be mutually exclusive?

I have been a life-long pessimist. If I accomplish something, I always feel that it's not enough. That I could have done better. And God forbid if I make any mistake, I am the first to run myself down (Question:Is this pessimism or trying to be perfect all the time? Not sure).


There is some term in psychology called 'Defensive Pessimism'.Actually, I had no idea about it. But when I read what it means, I felt like that's what I do all the time. After every exam/interview, my mom used to ask me how it went. Every time I used to say ok-ok types. Coz I myself have never felt overly confident about my abilities. I always think that whatever I know, it's very basic. Every person must know at least this much. My poor ma spent all my school and college years thinking that I would surely fail in the exams. So whenever the results were out, and I managed to do well, she used to be so happy. Even I would be happy coz I always had this feeling that I would fail. Which is exaggerating things a bit too far, coz I was never a bad student. It’s hard to be pessimistic when you know you are good.


Being pessimistic has some advantages too. Since I have several hundred scenarios of what could go wrong, it makes me extra cautious. And I try to think of solutions to the problems. Any good thing that happens to me is so surprisingly wonderful. The feeling of happiness is heightened since it was completely unexpected. And if anything bad happens, it feels anticlimactic.


But I would gladly change this thing about myself. It's no fun thinking constantly about the worst thing that could happen to me. I don't like acting like the Angel of Death and Doom. And sometimes when bad things are not happening as fast I like, I deliberately set out to wreck things. I know it's very dumb of me, but the relief that I feel after the worst comes true is kind of therapeutic. I am trying to reach some sort of middle ground. But I don’t know whether I will live to see that day...... [Ahhh, spoken like a true pessimist :-)]
Posted at 10:45 PM No comments: Links to this post

Email ThisBlogThis!Share to TwitterShare to FacebookShare to Pinterest
Labels: Babble

Are the above messages writing in some gibberish language? I can understand them perfectly well. And I suppose one doesn't need to have a high IQ to understand it. I am not going to act like Ramadoss and constantly hound Shahrukh about his smoking. If Shahrukh wants to smoke his way to death, more power to him. I don't really care about thousands of people suffering from cancer or cirrhosis. But when I see some of my near and dear ones smoking/drinking, it bothers me a little.
I really can't understand some of the arguments that people put forward.
1) It relieves stress
Really??? For how long, till the time of the hangover or the next smoking session? And is it worth all the trouble that comes later on? Isn’t that going to be more stressful?
2) I do it coz all my friends do it. It's cool.
This is probably the stupidest excuse. I thought peer pressure was supposed to end after teenage years. I would rather drink a mocktail, at least it tastes good. I used to take a bottle of bournvita to office and drink it. Who cares if people make fun! Seeing people swaying after drinking too much, stinking like hell is definitely not cool. Why is alcohol needed to have a good time? Isn't the company of friends and family enough for that?
3) It gives me a kick
Well if kick is what you want, I would be most happy to give you a kick in the rear. It's been a reaaaaaaallllllllly long time since I have hit anyone and I am just itching to do so.

We have some mini bottles of liquor at home which my dad got on his travels abroad. And long time back, I opened a bottle of vodka with every intention of drinking it. Not because I wanted to be cool or anything. But I really wanted to know what the whole fuss about alcohol is. One whiff from the bottle was enough to put me off. If the smell is this bad, I can just imagine how bad the taste would be. Some time later, I gathered up enough courage and had some sips of dessert wine. It tasted like Glycodin.No, I think Glycodin tastes better than wine.

Smoking, that I am never gonna try. I don't really need to experiment with that to know if it's good or bad. Thanks to the smokers around me, I must have already inhaled significant amount of smoke. People, if you want to smoke, please go to some secluded place. And when you come back don't just chew on some gum or mints. But also spray some deodorant on your clothes. Coz u stink so bad!!

I thought of putting up some pictures of people with cancer caused due to smoking and suffering alcoholics. But I know, it's not going to bother the people who do smoke/drink. It's just going to upset me every time I visit this page.
Posted at 9:52 PM 2 comments: Links to this post